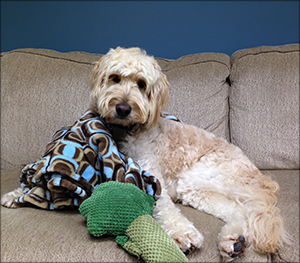 Something my mom said in therapy today got my attention. That doesn’t happen often unless there are treats involved, so I thought it was worth passing on! She was seeing a client who’d just returned from a lengthy and successful stay at a residential treatment center for her eating disorder. When “Jessie” entered the office, my mom’s face lit up and she said:

“It’s so great to meet you for the second first time!”

Turns out Jessie was so malnourished from and preoccupied with her anorexia during the months prior to going to residential treatment that she was unable to be fully present, to manifest her true spirit, to be spontaneous and receptive to connection. Although they’d spent hours together talking about the disease and the toll it was taking on her life, Jessie’s attachment to it was like me with a coveted bone—single mindedly consumed by it. She couldn’t resonate with the concerns expressed for her health, or feel the empathic impact of loving regard my mom tried to convey. Jessie’s bone was her bony body and she was devoted to preserving it.

Jessie was a freshman in college during this time, and getting straight A’s was her other passion. She didn’t realize the added effort it took to accomplish this with a “brain on anorexia” as my mom likes to say. Jessie’s 4.0 was only further confirmation to her that she was thriving, not dying. It was several weeks into residential treatment before the light within Jessie began to glimmer, and she had the disorienting experience all those who’ve recovered from an eating disorder describe: Looking back on their lives with new eyes, re-visioning their past through a whole vs. a hollow lens. It’s simultaneously liberating and daunting. This is another way in which second firsts come into play.

Jessie was terrified to return to school, realizing now that all the connections she’d made her first semester were informed and shaped by her illness. Where she went, who she ate with, what she said, wore, and did were all deeply influenced by her symptom status at the time. Her peers had not seen the smile that now easily enlivened her face, nor heard the deep and contagious laughter that animated her current conversation. Shy by nature-which anorexia distracted her from-Jessie dreaded questions regarding her abrupt departure mid-semester, as well as comments about changes in her appearance. As with re-visioning her past, returning to school entailed re-connecting with peers from a place of wholeness vs. hollowness. Rather than dread it,

my mom suggested she embrace it as an opportunity for second firsts, to use her vulnerability to her advantage and dare to find out who her whole self was in relationship!

This all sounds a lot more complicated than what us pups do when we reunite, but we have the apparent blessing of not being self-conscious. I’m planning to test the theory of second firsts at home tonight and see if it applies to my supper!